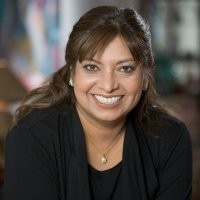 The birth of the "portfolio aSaaSin" and the history and future of marketing automation with Anu Shukla, Co founder of Tapjoy and Botco.ai

Anu Shukla, Co founder and Executive Chairman of Botco.ai, joins the show to talk about:

- Anu's experiences as a pioneer in the marketing automation space, as well as the ups and downs of building on someone else's platform.

- Anu's evolution as an entrepreneur from a specialist to a portfolio aSaaSin.

Anu Shukla is a serial entrepreneur with over 20 years of high-tech industry experience. She is the Founder & CEO of RewardsPay Inc. Formerly, she was the founder and CEO of Offerpal Media ( aka Tapjoy, Inc.) She was the Founder and former CEO and Director of MyBuys Inc. (formerly Rubiconsoft) a venture backed company she started in 2002.

Prior to RubiconSoft, she was founder and CEO of Rubric, Inc, a Silicon Valley software company that pioneered the explosive new category of Enterprise Marketing Automation systems to collaborate, plan, execute, manage and measure marketing campaigns. Rubric eMA is used by F500 and e-commerce companies to drive revenues and build "sticky" customer relationships. Rubric, was acquired for $366 million in February 2000.

Prior to founding Rubric, Ms. Shukla was the VP of Marketing and Product Strategy at Versata (VATA). As the COO at mFactory, Inc., Ms. Shukla raised significant growth capital and helped it make a successful transition from a technology start-up to ongoing commercial concern. The company was acquired by Quark. Ms. Shukla was Vice President of Worldwide Marketing and Product Management at Compuware/Uniface Corporation (CPWR), where sales grew from $10 million to more than $85 million. She played a major role in Compuware's $433 million acquisition of Uniface. Ms. Shukla served on the Board of Directors of FWE&E (Forum for Women Entrepreneurs and Executives), International Museum of Women ( IMOW.org) and the Advisory Board for the Leavey School of Business, Santa Clara University.

Ms. Shukla was named to the Computer Industry “Dream Team” by Business 2.0 magazine in 2004, awarded the YSU Distinguished Alumni award in 2005, and the Entrepreneur of the Year by the Washington D.C. based Dialogue on Diversity organization in 2005. Ms Shukla served as the commencement speaker and was awarded an Honorary Doctorate from her Alma Mater YSU in 2008.